Just over a year ago Stepney City Farm invited me to set up my blacksmiths workshop in one of the 3 Rural Arts Centre workshops, this was an inviting proposition to me as I had just been asked to leave my workshop in Hackney due to re-generation (for the third time).

My first impression was the setting, in the shadow of the beautiful St Dunstan’s Church (one on the patron saints of blacksmithing) and Stepney Green.  Hard to imagine the farm is only a couple of miles from the city. The staff and management at the farm were welcoming and friendly. 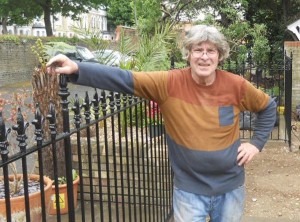 The workshop proved suitable and I moved in and started work on 1st Jan 2014.  It seemed appropriate to be starting work on 1st. Jan the business and the farm were heading into a new year.  One of the first things to do once the workshop became functional was to decide the direction I wanted for the workshop in the future.  So it was decided we would have a kind of constitution.

– To promote traditional values and techniques in blacksmithing wherever possible.

– To actively pass on the trade through free courses, paid courses, trainee schemes.

– To move the blacksmithing trade towards becoming a viable 21st century business.  Including small business management.

Well one year on how have we done?

We have had a good year in all three areas, we have had the opportunity to do a good selection of high quality traditional and modern artistic ironwork.

Richard Pace has become an associate of the workshop and is doing really well with the courses.  www.blacksmithingcourses.co.uk 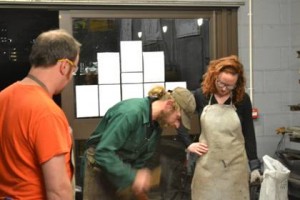 We have two volunteer trainees one of which is starting his own workshop.

During our courses we pass on hints and tips to running a workshop in the 21st. century. 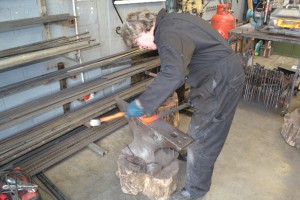 While we have been doing all this, vegetables have grown, lambs and goats have been born and the farm and the blacksmith have survived another year.